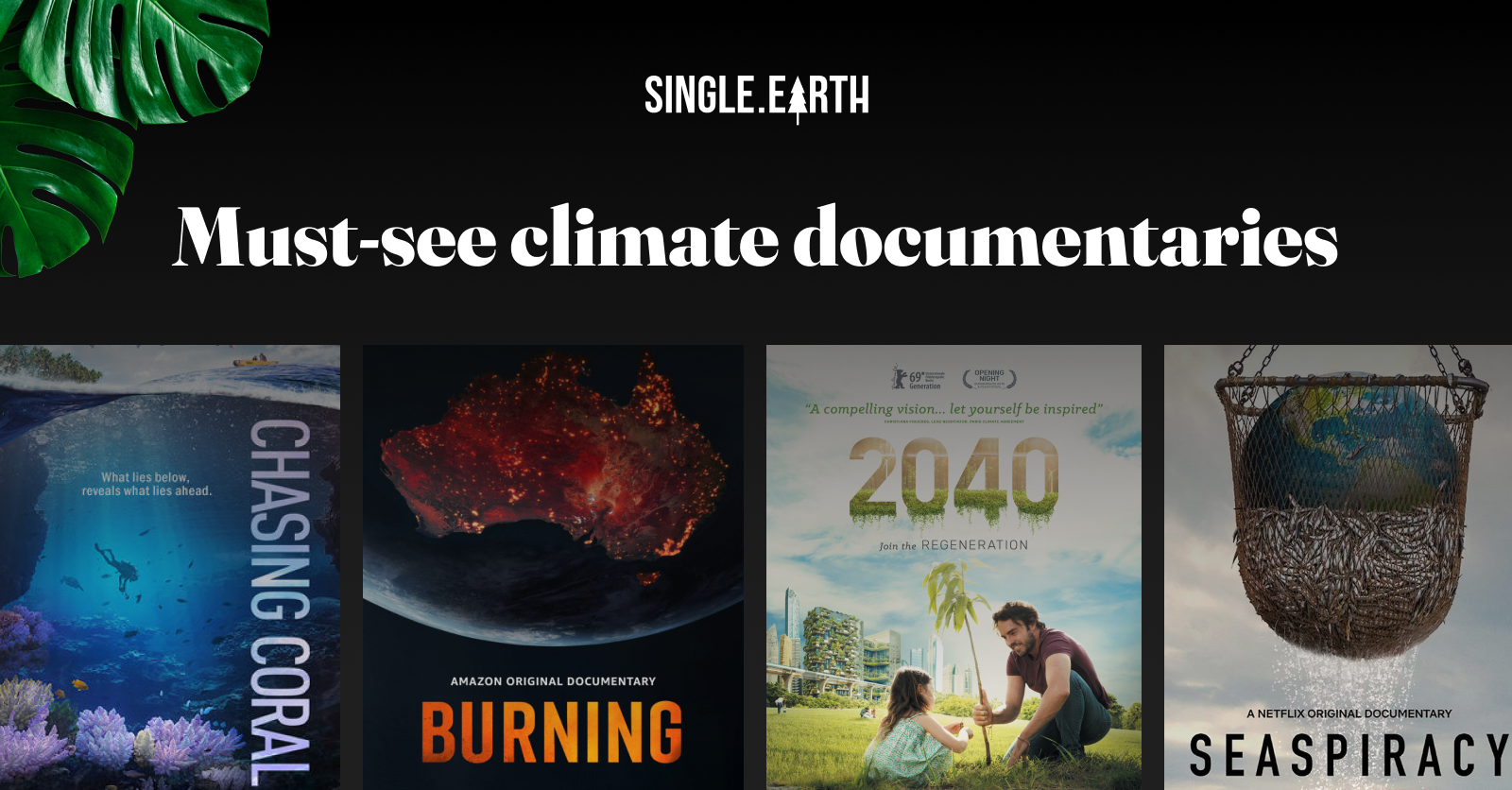 Biodiversity loss and climate change are one of the two biggest threats to humankind’s survival on Earth.

That’s what we had in mind when compiling this list. Educational, yet inspiring stories.

From marine life health to how humankind’s everyday food choices affect climate change, here’s a list of the best climate change documentaries. The list starts off with a truly heart-warming story to ease you into the topic. The last documentary is a powerful piece that shows the impact documentaries can have.

This list can’t be without the legendary Sir David Attenborough, who has made it his life mission to raise awareness on climate change and biodiversity loss.

Taking a look at practical solutions to halt climate change through the lense of doing it for the future generations.

“2040” -- the filmmaker’s letter to his 4 year-old daughter about making a change through everyday action.

A personal story of a filmmaker and his attempts to make a better world for his daughter, who will be 21 in 2040. He embarks on a journey to explore what the future would look like by the year 2040 if we simply embraced the best solutions already available to us to improve our planet and shifted them into the mainstream: practical solutions to environmental concerns.

A visual letter to his 4-year old mixed with dramatized sequences and high-end visual effects to tell the story.

Get ready to learn with David Attenborough, as he brings yet another important topic to the table and explains it in an understandable and motivational way.

“Extinction: The Facts” -- with a million species at risk of extinction, Sir David Attenborough explores how the biodiversity crisis affects us all.

As the world is in the midst of a sixth mass extinction which is brought on by human activity, the legendary David Attenborough set on a journey to explore what has happened and -- most importantly -- how to turn it around.

Deforestation, poaching, overfishing, and other human actions have led to extensive climate change and biodiversity loss. The documentary goes deep into how human behavior and development is pushing one million species to the brink of extinction, how biodiversity is linked to epidemics, and many more.

Luckily, this documentary also offers solutions: learn how biodiversity loss can be slowed down. Cutting pesticide usage and environmental labels on food products are just a few of many fixes proposed.

Get ready for breath-taking shots of marine life across the world. This documentary captures the beauty of marine life but also the deep sadness and awe of how quickly we’re losing coral reefs.

“Chasing Coral” -- a team of divers, photographers, and scientists go on an ocean adventure to discover what’s happening with coral reefs amidst climate change.

As coral reefs around the world are vanishing at unprecedented rate, a team of divers, photographers, and scientists strives to document the alarming disappearance of coral reefs in warming oceans, mostly due to coral bleaching. As the change is so extensive, they succeed in showing the dire condition of reefs across the globe through a time-lapse framework and how quickly we’re losing living nature around us.

The looming death of aquatic life in this movie is so visible that it is a real eye-opener. Climate change effects are clear and real shift change needs to happen, now.

As wildfires cause new levels of destruction and lives lost yearly, they're clear evidence of the rapid climate change.

“Burning” -- the deadly Australian bushfires of 2019-2020 through the eyes of victims of the fires, activists, and scientists.

The filmmaker takes on telling the story of the unprecedented, catastrophic, and deadly Australian bushfires of 2019-2020, also known as ‘Black Summer’. It’s narrated by those directly affected and involved, as well as activists and scientists.

The documentary exposes the Australian government’s inaction and the irreversible damage the catastrophic fires left behind.

Learn about what humankind’s eating habits are doing to Earth and really to the chances of humans’ surviving.

“Eating Our Way to Extinction” -- a documentary that opens the lid on the elephant in the room no one wants to talk about.

“You will never look at your food and the food industry the same after watching this movie” is a strong promise circling the internet. A powerful cinematic documentary diving deep into how the global food industry is pushing climate change through its unsustainable practices.

Undercover footage and testimonies of Indigenous peoples show what’s happening in the food industry and how food security is compromised. An eye-opening documentary.

6. Breaking Boundaries: The Science of Our Planet

Discover how much humankind depends on biodiversity and how our actions have pushed us into a biodiversity collapse.

“Breaking Boundaries: The Science of Our Planet” -- a scientific view to Earth’s biodiversity collapse, and how the crisis can still be averted.

Sir David Attenborough and scientist Johan Rockström go on a journey to explore planetary boundaries all life depends on. Have we passed the threshold of these boundaries or is there still hope?

For many, we’ve already pushed beyond critical thresholds. Learn what it means and how to get back into the safe zone. A fascinating and motivating watch.

Get ready for eye-opening footage of what humankind actions have led to and learn how we can still turn it around.

“Before the Flood” -- how society can protect endangered species, ecosystems, and native communities amidst climate change.

Trailer: Before the Flood trailer

Go on a journey with Leonardo DiCaprio as he travels the world to witness firsthand the effects of climate change, seeing everything from ancient melting glaciers to destroyed Indonesian tropical forests. See how climate change affects the environment and how humankind can still make a difference with protecting endangered species, ecosystems, and natuve communities.

This documentary reveals the urgency of halting climate change and how much we really depend on fossil fuels.

Overfishing is just the tip of the iceberg when it comes to how humans have affected marine life.

“Seaspiracy” -- real story on how much harm humans keep inflicting to marine life.

Passionate about ocean life, the filmmaker sets out to document how much harm humans have done and keep doing to marine species - and uncovers alarming global corruption.

Described as “a shocking documentary film about the environmental impact of fishing”, and “cutting out or at least limiting fish consumption after this film is the only option”, it’s a must watch for anyone.

Soil health isn’t talked about nearly enough. This documentary is here to change it.

“Kiss the Ground” -- an eye-opening look at how soil health can halt climate change, balance climate, and feed millions.

This documentary reveals the power of soil. By regenerating the world’s soils, we could stabilize Earth’s climate, restore lost ecosystems, and create abundant food supplies. A group of activists, scientists, farmers, and politicians join together in a global movement of "Regenerative Agriculture''.

Graphics and visuals, NASA and NOAA footage, and storytelling shows how soil is the missing piece of slowing down climate change.

Only 8 years old, yet, somehow still missed by many. Virunga is an inspiring special story on its own, but made even more special about the real change this documentary brought on.

“Virunga” -- a team of brave individuals risking their lives to protect the last mountain gorillas.

The documentary follows 4 rangers who risked their lives to protect Africa’s most precious national park and its endangered gorillas, one of the last mountain gorillas still alive.

While telling these rangers story, it also:

After the documentary aired, Soco International oil company was under significant criticism and in 2014 it officially shut down all oil exploration in the Virunga area. This shows the real power of documentaries and Virunga is a must-watch story for everyone.

What all these documentaries have in common is they’re clear about the part human actions have played in worsening climate change. There’s so much to learn on how we can turn it around and all these movies propose solutions.

Keep an eye out for future lists on documentaries, movies, and books about climate change and biodiversity. All recommendations on what should be on these lists are very welcome.

The information on this website, including any reference to our services, MERIT tokens, payment instruments, etc., is preliminary and provided for information and marketing purposes only. Except for operating a waiting list and related campaign(s), we are currently not providing any services and the website describes activities we are working on. More comprehensive information, incl. information about the risks that are associated with cryptoassets and with our own services, will be made available together with the business launch.
© Single.Earth OÜ 2022