“If RCP8.5 did not exist, we'd have to create it”: the harsh truth about the worst-case climate change scenario that concludes a study from the Woods Hole Research Center.

In 2005, the United Nations’ IPCC modelled alternative climate futures, known as Representative Concentration Pathways (RCPs). They reflect the possible greenhouse gas concentration trajectories until the end of this century. Nobody planned on taking the worst possible case, which is called the RCP8.5, “high-emissions scenario”, or “business as usual”.

It’s been 15 years since the inception of the RCP pathways. So far, we’re steadily on track towards the worst-case scenario. Want to know what the world will be like 30 years from now if we continue releasing this much carbon into the atmosphere?

Welcome to 2050 in the worst-case climate change scenario RCP8.5. 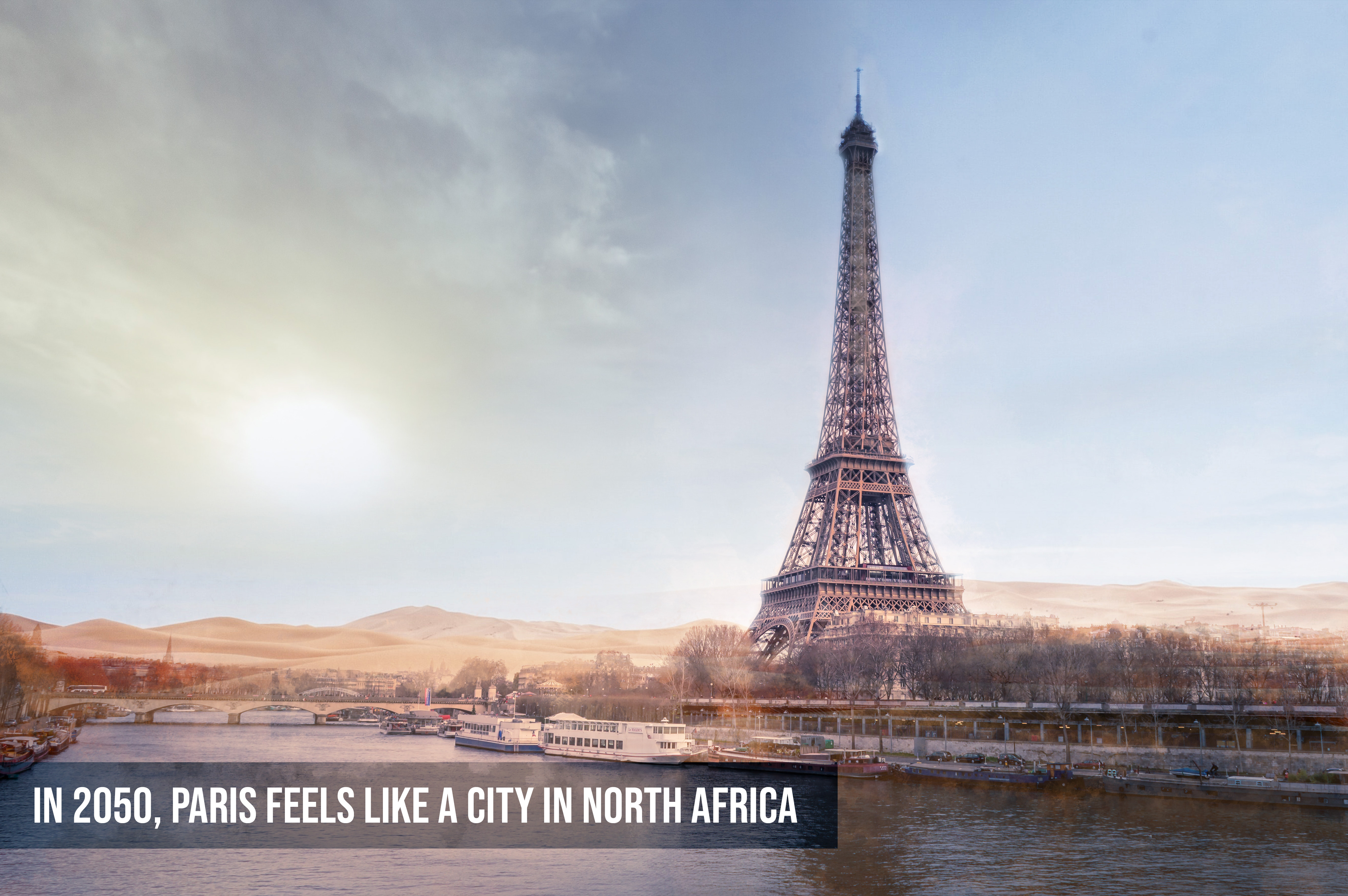 Worst-Case Scenario for the Natural World: Moving 1000 km closer to the equator

London, known for its rainy and gloomy weather, now has temperatures resembling Barcelona. Summer days reaching a scorching 30°C+ are common. Temperatures in the hottest months have climbed almost 6°C.

Similar shifts have taken place across the world. With no reduction in carbon footprints, weather conditions in the northern hemisphere have moved 1000 km south. Madrid’s climate resembles the one we knew in Marrakech; Stockholm now records similar patterns to Budapest; Moscow is like Sofia; Seattle feels like San Francisco; Tokyo is similar to Changsha.

Cities we knew as the tropics now have weather we’ve never seen before. 22% of the world’s urban areas exist in a climate crisis unimagined decades ago, with both heavy rain and severe droughts. Kuala Lumpur, Jakarta, Rangoon, and Singapore are some of the worst-hit places every year.

CO2 levels mean that global average temperatures have risen more than 4 degrees since the pre-industrial revolution. Though humans have never experienced conditions like this before, these temperatures are nothing new to our home planet.

Earth has gone through global warmings to this extent before but never with the speed of recent years. Changes in global temperatures that used to take tens of thousands of years are now happening in a fraction of the time: centuries and decades, even years and months.

By the end of the century, we’ll have an entirely different planet. The vast majority of tropical rainforests - once lush and biodiverse ecosystems - are now savannahs and grasslands. Arctic sea ice will be gone along with many unique forms of life that once inhabited the North Pole. Polar bears will lose the fight for survival. 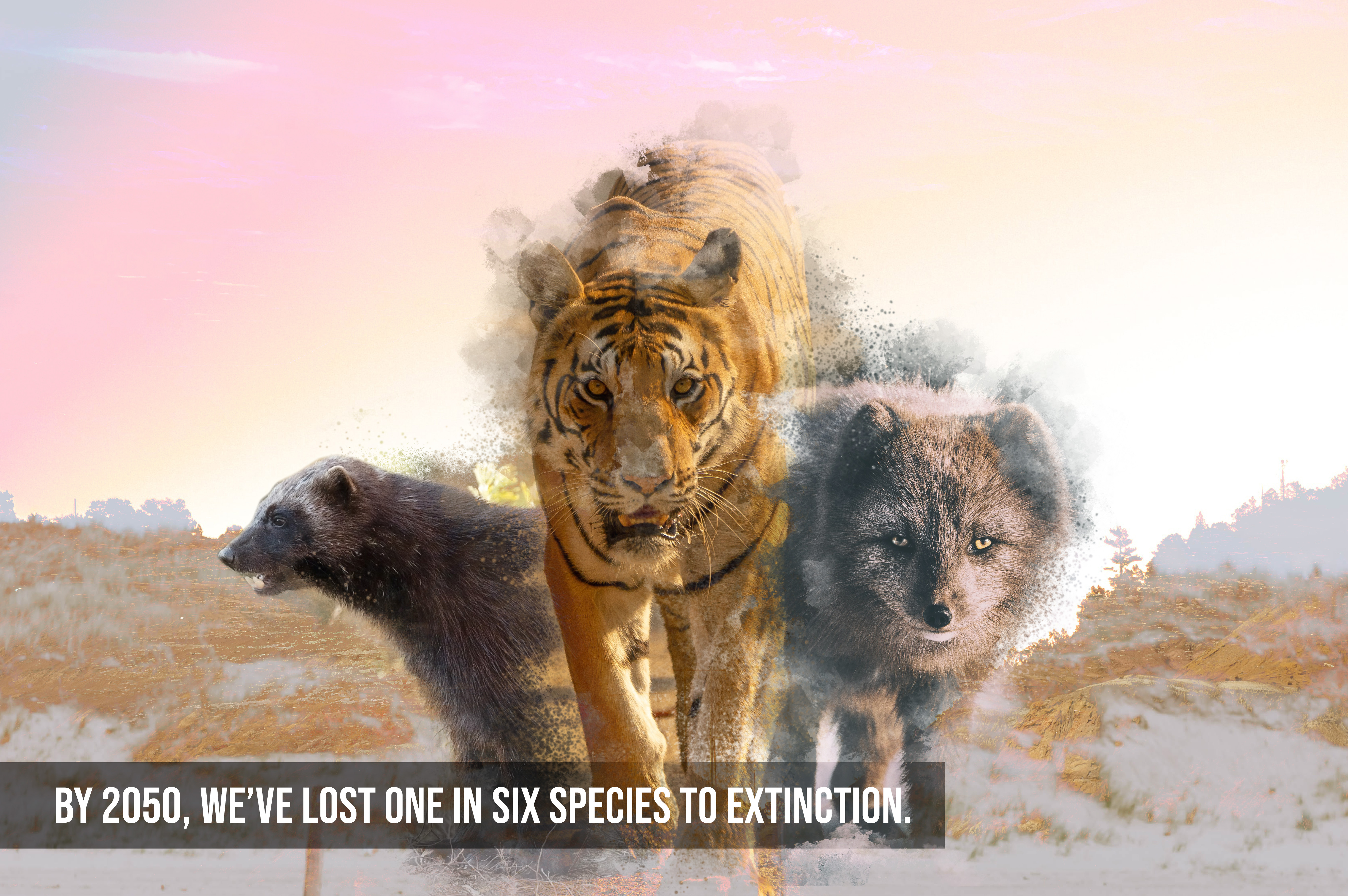 Worst-Case Scenario for Biodiversity: Every 6th Species Lost to Extinction

The Bengal tiger has become the face of the global extinction wave, representing decades’ worth of biodiversity loss. Like hundreds of other lost species, rapid climate change and rising sea levels are to blame for habitat loss.

We’ve bid farewell to arctic foxes, wolverines, marbled polecats, and many other terrestrial mammals. Most of the previously known endangered species have gone extinct globally. A few have vanished regionally and have little chance of surviving in their ever-shrinking habitats.

Besides terrestrial mammals, we’ve lost several whale species to the warming oceans. North Pacific Right Whales, Gray whales, North Pacific Bottle-Nosed Whales, and many other giants of the sea can now only be found in the marine history books.

Many dolphin and seal species have faced the same fate. In addition to the sea surface temperature rise of 4.5°C, marine traffic, offshore oil, and gas exploitation have contributed to the destruction of habitable ecosystems for marine animals. 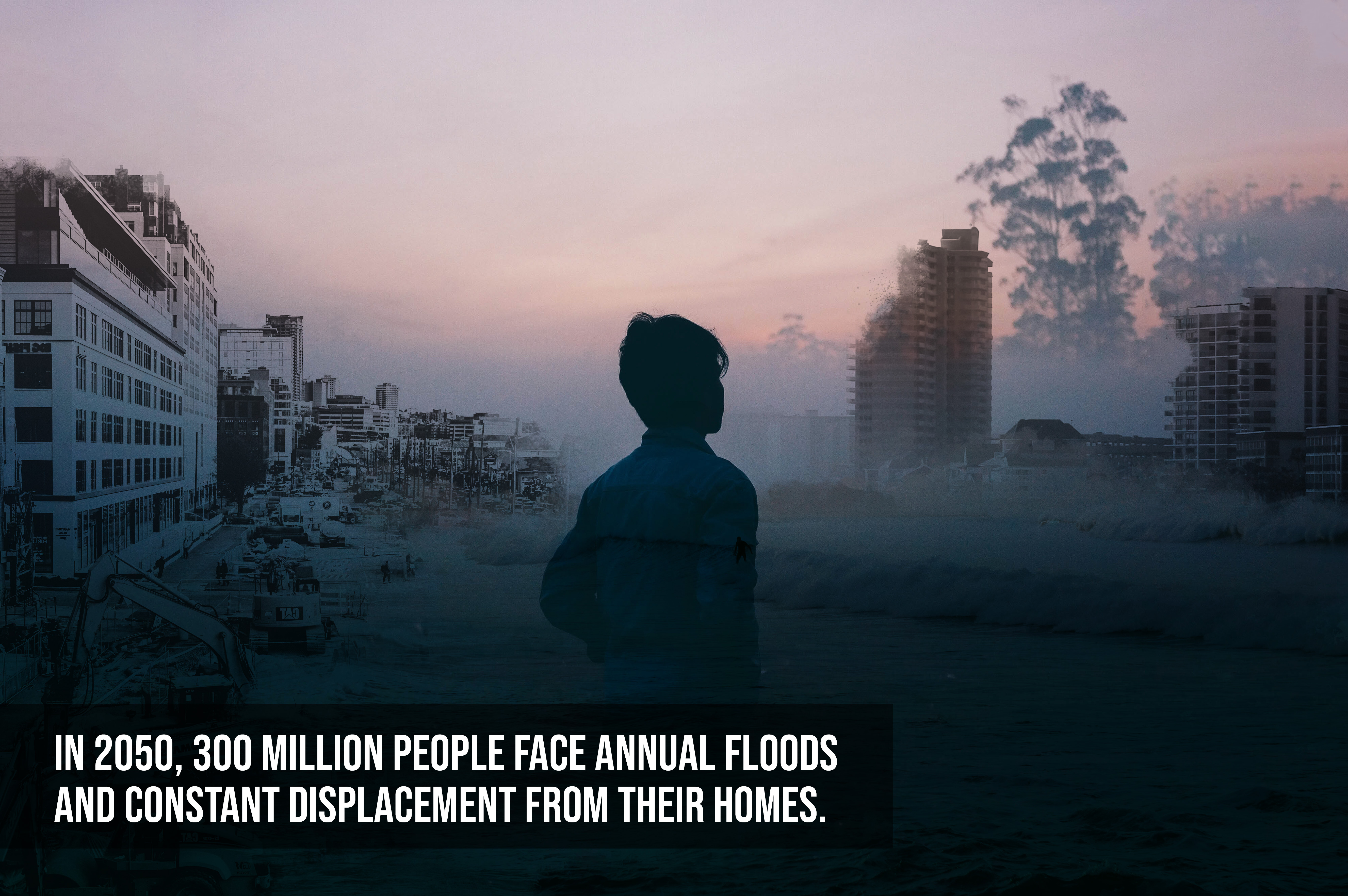 But it’s getting tougher and tougher out here. Every fourth Bangladeshi’s home is flooded each year; every third Vietnamese’s home, too. 300 million people across the world struggle with annual floods and constant displacement.

Some of the poorest countries in the world are hit the hardest, but climate change affects us all. Rising sea levels have changed coastal areas across the globe.

It’s frightening to see how countries that have barely recovered from the floods get hit by severe droughts soon after. Half of the US West Coast dries up each summer, making raging wildfires impossible to avoid.

While droughts have expanded spatially - periodically affecting more than half of Europe, Central America, and South Africa - they’re also lasting longer. An annual drought period lasting at least two months has become a rule rather than an exception.

These events have made agriculture one of the most vulnerable industries in the world. With vast proportions of crops destroyed by floods, droughts, and storms, food prices rise steadily. A 29% cereal price increase reveals the scale of the problem.

Extreme weather conditions have a direct impact on people’s health, as well. 95,000 died due to heat-related conditions this year. While it’s often the heart that fails when temperatures go up, we’re also witnessing an immense spread of deadly zoonotic diseases.

Malaria and dengue have received a massive boost from global warming. Rising temperatures have created suitable living conditions for mosquitoes in places they would not have survived a decade or two ago. The question is when - not if - they will spread outside their current habitats.

Curious to know what’s happened to COVID-19? That was solved with a vaccine.

In retrospect, though, this nasty virus was just an introduction to the global pandemics we had coming. Due to wildlife habitat loss, more and more zoonotic diseases have jumped to humans in the past decades. New viruses and hotspots occur on an almost monthly basis now. 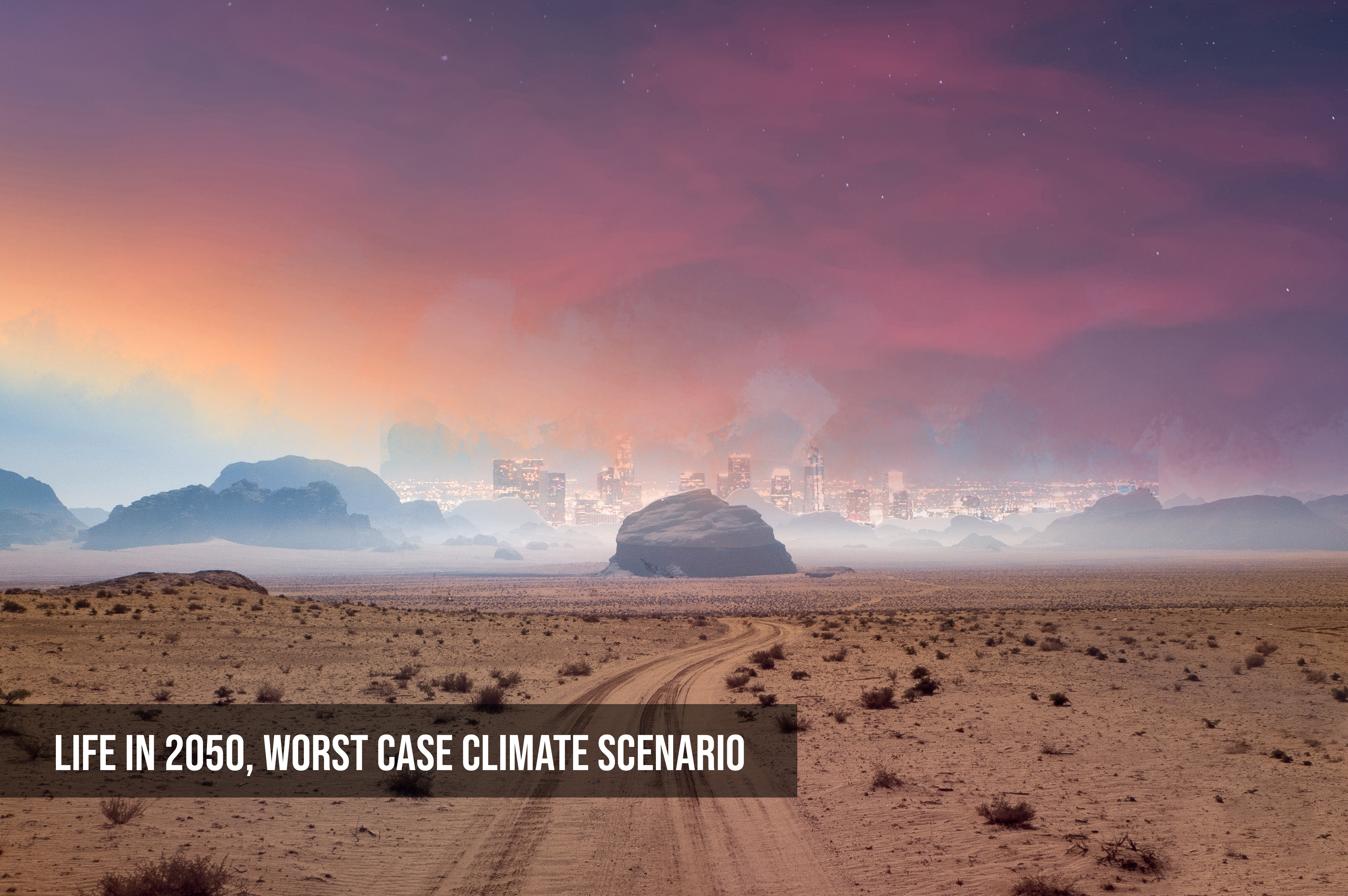 Life on Earth in 2050 is terrifying. We’re witnessing how the planet is being reshaped from a rich and biodiverse environment to a harsh and unwelcoming place where humans and other species are constantly fighting for survival.

Many species have been wiped off the Earth. Vast areas of breathtakingly beautiful nature have been destroyed, never to be seen again.

Floods, droughts, storms, and heatwaves repeatedly thrash our homes. It would have been a devastating sight to see back in 2020.

Back to today, RCP8.5 is seen by many as a worst-case climate scenario that will never actually happen. However, scientists warn that we cannot create predictions by looking only at the future. We must also take historical data and current experience into account. Today, this points to RCP8.5.

“Not only are the emissions consistent with RCP8.5 in close agreement with historical total cumulative CO2 emissions (within 1%), but RCP8.5 is also the best match out to mid-century under current and stated policies with still highly plausible levels of CO2 emissions in 2100,” Dr Christopher Schwalm et al, Woods Whole Research Center